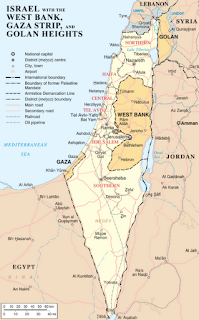 As we were preparing for our Israel Pilgrimage, the Bishop told us that he expected us to be more confused about the political situation after we were there.  Certainly any simplistic or one-sided understandings were quickly thrown out the window.

One of the biggest problems is that both the Israeli and the Palestinian side have their own compelling and internally consistent narrative that has almost nothing to do with the other side's.  We could see these narratives as we traveled, and their lack of congruence was discussed by both Israeli and Palestinian speakers with some self-awareness.  Add to that the Christian experience as a religious minority among the Palestinian minority, as well as the disproportionate influence of the United States government and private US funders, and the whole situation is quite tricky.  For the sake of explanation, below is a brief summary of both narratives, probably way over-simplified.

The Israeli narrative starts with being oppressed almost everywhere they have lived since the fall of the Roman Empire, especially in Europe.  They were accused of witchcraft because they were smart enough to have cats who ate rats during the plague so that more of them survived. They were resented for growing wealthy by lending Christians money when other Christians weren't allowed to do so.  They were killed by Russian pogroms.  At the end of the 19th Century, a Zionist movement began to bring the Jewish people back to their own homeland.  (At some point, Uganda and South America were considered as a homeland, in addition to Palestine.)  Between then and World War II, Jews moved to Israel.  After the Holocaust, the state of Israel was created out of a much smaller portion of Palestine than it now occupies.  Over the next twenty years, as their neighbors attacked Israel, it overcame their attacks bolstered by the fulfillment of the divine promise of land to the Patriarchs, the mandate of the United Nations, and the military support of the United States, gaining more territory in the process.  In 1967, Israel's neighbors attacked it in the Six-Days War, resulting in the Israeli annex of the West Bank, East Jerusalem, the Gaza Strip and the Golan Heights, primarily for security purposes.  Since 1967, it has controlled these areas, but not integrated them into Israel proper.  In 1993, Israel recognized the Palestinians existence in the Oslo Accords, and a number of other peace agreements with neighbors followed.  Portions of the occupied territories were turned over to Palestinian control as part of those agreements.  The Israeli narrative sees the Palestinians as walking away from a proposed two-state solution during negotiations in the late 1990's.   In 2000, a wave of suicide bombings began.  In response, Israel put up security walls and fences through the middle of the occupied territories.  The Palestinians don't like them, but they work, including for Palestinians in Israel and Jerusalem who want to live their lives without suicide bombings.  At times, such as in Gaza in the mid-2000's, Israel has unilaterally pulled out of areas and dismantled settlements only to have rockets launched into their territories in return.  Overall, the Israeli narrative is that they have a right to be there and will do what is necessary to defend themselves, including putting settlements into Palestinian areas that are considered illegal under international law.

The Palestinian narrative begins in the early 600's, when Jerusalem was taken by the Muslims without bloodshed.  The Patriarch of Jerusalem, as the Christian religious leader in charge of the city, was glad to have their protection and governance.  The Muslim conqueror did not go to Christian religious sites to pray or make them into Mosques, and only built a Muslim holy site at the Dome of the Rock because no Jewish or Christian prayer centers had been built there since the Romans destroyed the Second Temple in 70 AD.  With the brief interruption of the Crusades, Muslims ruled Jerusalem for nearly 1500 years, longer than Jews, Christians or pagans, and allowed freedom of religious worship for all "people of the book" (Jews, Christians and Muslims).  As one Palestinians said to us, "We have always lived alongside Jews and Christians in Jerusalem without a problem.  At the end of the day, we're all Arabs.  But why are these Polish people coming here?" (Referring to the immigration of Eastern European Jews.)  Or, as another said, "Why do we suffer and lose our land because Westerners mistreated Jewish people?"  The take issues with the original Zionist slogan, "A land without a people for a people without a land," noting that the land did have people on it.   Some Palestinians were driven out of their homes into refugee camps when Israel was created.  In 1993, Palestinians, led by Yasser Arafat, acknowledged Israel's existence.  But, as one of our speakers admitted, "The suicide bombings [in 2000] were bad politically for us, in addition to the innocent lives lost."  The security walls put up by the Israeli government over the past decade are a huge issue both ideologically and practically, since they cut Palestinians from their family members and isolate communities socially, politically and economically.  The settlements are an even bigger problem, since many of them bring very ideological Jews with a black/white worldview from places like Brooklyn and drop them in the middle of a complex Mid-Eastern situation that goes back millennia.  In addition, the political status of Palestinians can be problematic.  In the West Bank, Palestinians are part of the Palestinian Authority.  In Israel proper, they are Israeli citizens.  In East Jerusalem, they are practically stateless persons, often carrying a Jordanian passport and an Israel resident document.

The United States has an enormous influence in the area.  US military support is crucial to Israeli security.  American Jewish and Conservative Christian money finances much in Israel.  Liberal US money, as well as USAID, supports humanitarian projects in the West Bank.  The peace process in Israel/Palestine has been shepherded when successful by American Presidents such as Jimmy Carter and Bill Clinton.  The US influence is why much of the graffiti we saw on a security wall, as well as various Palestinian political billboards near Bethlehem, were in English.  The audience is American visitors, not young Palestinians.  Probably no significant movement forward for peace will occur without strong American pressure on every side.


Currently, no one seems to hold much hope for a political solution in the near term.  All sides are doing a lot of political posturing, without providing much concrete opening for negotiations.  Ideology abounds, with very little practicality.  Additionally, since the peace process stalled in 2000, person-to-person interactions between Palestinians and Jews have diminished significantly.  Some of this is ideological -- if we are in a state of war, why consort with the enemy.  But some of it is practical -- given security measures, Palestinians' movement into Israel proper is restricted and Israelis have little reason to go into Palestinian regions.  While young people seem less ideologically hidebound then older generations, the opportunities for cosmopolitan mixing are scarce.

Miracles remain possible, however.  On the last Friday of Ramadan this year, the Israeli government opened all checkpoints into Jerusalem.  Many people were able to come and pray in the Holy City for the first time in their lives, and the day went off without incident.  Some commentators felt that if this could happen for one day, maybe it could happen for good.  Maybe it can.  While peace is hard and always tenuous, there have been times in Jerusalem's history when people of different faiths and ethnic groups have lived together more or less peacefully.  To get from here to there, three things seem to be necessary.  The first is people on both sides will have to be more interested in a just and peaceful society than in defending their ideologies, ignoring their own harmful deeds, or avenging past harms.  Second, contact between average Israelis and average Palestinians needs to increase.  All sides need to learn about each other's religious beliefs, history, fears and aspirations.  Finally, God needs to give all his children, whether Jewish, Christian, Muslim, or otherwise, the healing, the courage and the love needed to make peace possible.  We can all help with God's important work by doing what Psalm 122 commends us to: "Pray for the peace of Jerusalem, may they prosper who love you."  If enough of us pray for peace to the God of Abraham, maybe all those who love Jerusalem of every race, tribe, people, and language will truly be able to prosper together.

Also worth mentioning is a great film, West Bank Story, that our guide showed us on our last evening.  An Oscar-winning short film, West Bank Story is a hopeful and humorous look at Jewish-Palestinian relations in the form of a West Side Story-esque romance between an Israeli soldier and a Palestinian cashier at the Hummus Hut.  Definitely worth ordering and watching.

Posted by Adam Trambley at 6:27 PM