Arriving at the Holy Land Hotel

The second blog about our Diocesan Pilgrimage to Jerusalem

We have arrived in Jerusalem and are preparing for bed in a small hotel in a Palestinian neighborhood in East Jerusalem called the Holy Land Hotel.  After an overnight plane flight with a number of short naps but little real sleep, probably the best I can do tonight is some impressions, which is really all we've had time for. 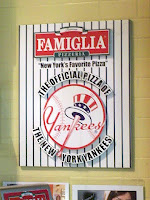 All the travel details went smoothly.  Many things took longer than one might hope, and the plane from Pittsburgh to Newark was late, but all it did was exchange a wait in one place for a wait in another.  In the Newark airport, we had a slice of pizza at Famous Famiglia, the official pizza of the New York Yankees.  On the overseas flight, with a full entertainment menu, Jane and I got to watch two episodes of Everyone Loves Raymond, which provided some hearty laughter at the end of the day.  While having a window seat provided less than enormous amounts of legroom, it gave two great blessings.  The first was being able to watch the sunrise from the air, while flying above a thick canopy of clouds.  Seeing the first glimpses of light grow into color and reflect off the clouds below always evokes a sense of praise and awe.  The second was looking over southeastern Europe and seeing the farms criss-crossing the hillsides of Hungary and Bulgaria.

The one disappointment of modern travel for pilgrimages is the difficulty in coming together as a group.  With everyone's seat-belt securely fastened and tray table in its fully locked and upright position, conversations and getting to know each other are difficult.  We are far from the Canterbury pilgrims of Chauser who told each other stories as they rode along.  (Kindles and in-flight entertainment systems add to the isolation, as well.)  Hopefully, plenty of other opportunities will present themselves as the trip proceeds.

Driving from Tel Aviv to Jerusalem, my first thoughts were how much Israel doesn't seem that much different from other places.  WIth the exception of one palm tree I spotted, the vegetation wouldn't have looked out of place driving from the Carolinas to Pennsylvania (although everything was much drier and browner).  The cars on the road were mostly small, but not unusual.  The vans seem to be mostly of the narrower kind seen in Europe.  Yet we could start to see differences from the road, as well.  A minaret in an Arab town.  An ancient site of some sort that didn't even merit a mention from the guide, but was clearly a thousand years older than anything on the United States Register of Historic Places.  The color of the buildings, which are almost all white, cream, or beige.  Then, as we approached Jerusalem, where all the buildings are required to be built of limestone, the white city gleams when viewed from a distance like no other city I've ever seen.

Before we went to the hotel, we walked along the outside of the Old City for about ten minutes.  At the gates, folks were preparing for a bazaar.  Wares were set up, kabobs were on the grill, and pallets carrying everything from food to fashion were being carted around.  We are staying in an Arab area of Jerusalem during the month of Ramadan.  One of Islam's spiritual disciplines is a month of fasting from sunrise to sunset during Ramadan.  So, when sunset comes, people come out to celebrate together.  Our guide told us that during other months, the area doesn't really have a  nightlife, but this month it does.  After dinner, we took a quick walk.  The gates to the Old City, as well as some of the streets, were decorated with lights.  People were selling roasted nuts, drinks, corn, and a variety of other foods, as well as shoes, clothing, electronics, housewares, and the tables of plastic paraphernalia that has now become a staple in every bazaar, festival, fair and flea market the world over. (One table was covered with hundreds of various television remote controls that made us think of Chip Beck.)  Most of the men wore shirts and slacks, and most of the women wore black dress with headscarves.  Even the children were present and involved, with some of the younger boys carrying trays of fruit drink about.  We'll go back another night when we aren't as tired and have more time to sample some delights and talk with some of the vendors (as well as get some photos).  A great introduction to the culture and the people surrounding us.

Also, for those interested in seeing more photos, I'll post some that (mostly) Jane or I take, but Missy Greene takes great pictures and is posting them on the Diocese's facebook page.