Why We Won't Be Using the Episcopal Church's Advertising Materials

Earlier this week, I received our diocese's e-newsletter that included a link to camera-ready evangelism materials produced by the Episcopal Church that can be used by congregations for postcards, ads and billboards.  Since I am always looking for helpful evangelism tools (what parish isn't?), I clicked the link.  I moved quickly from shock to disappointment to anger that our church is still promoting messages that make sharing the good news with unchurched people more difficult.

Here are a couple examples, and why we aren't using them. 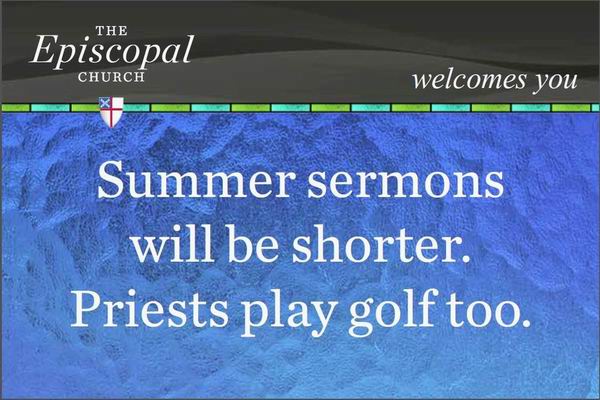 "Summer sermons will be shorter.  Priests play golf too."  I can't help but rephrasing this ad as, "Our preaching is such a waste of your time that in the summer, when your leisure time is more valuable, we'll waste less of it."  If our preaching isn't helping people live out their Christian lives in important ways, then we shouldn't be preaching.  If it is, let's advertise that: "Hear a message that will change your life before your Sunday morning tee time." 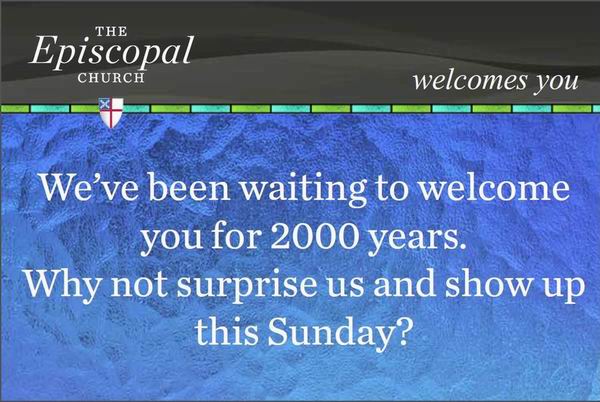 "Why not surprise us and show up this Sunday?"  When I showed this one to my deacon, he couldn't believe it.  "We pray daily for those who need a relationship with Christ to come to us," he said.  "We're expecting them when they come, we're not surprised."  Really, would anyone want to go to a church, or anywhere else, that would be surprised and unprepared for their arrival?  Many people don't return to a church they visit for precisely that reason.  When we hung the banner off the side of our church last year, we included our purpose statement (Worship God, Care for People, Grow as Christians) with the message "We're Expecting You" underneath. 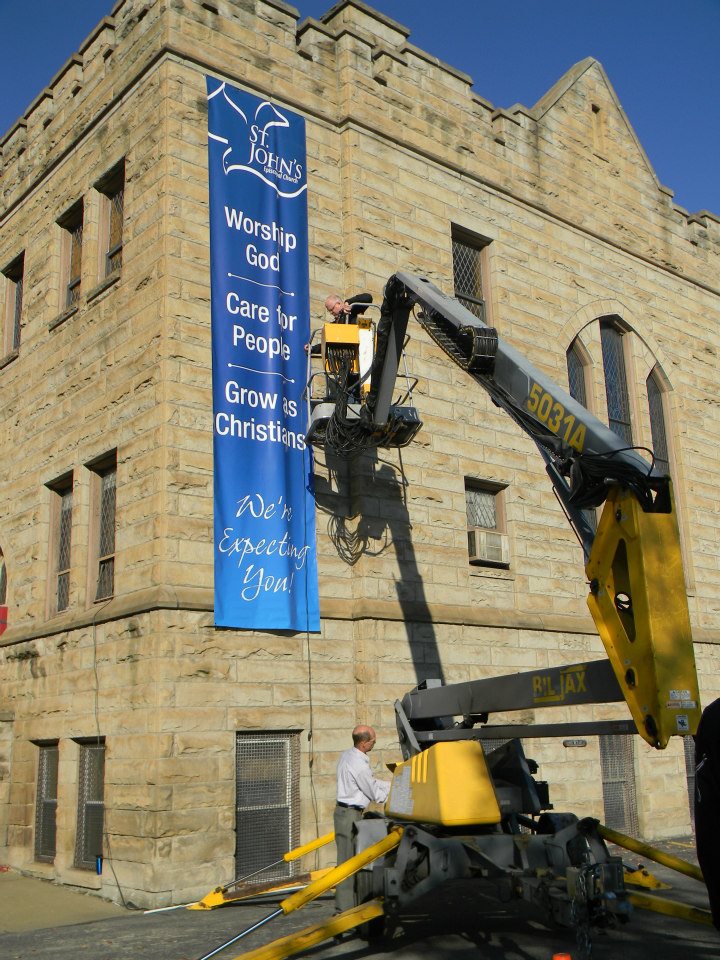 Then we come to "Come see what goes on between Easter and Christmas."

This message is a prime example of the insider language (interwoven with guilt) that turns newcomers off.  An increasing number of the folks in my community aren't in church on Easter or Christmas.  Some have never (!) been inside a church building, even for a wedding or funeral.  If we want Christmas and Easter Christians to come back, probably having a church leader reach out and see how to meet their needs is more helpful than a generic message, and this ad couldn't realistically be targeted to anyone else.

For better billboard and advertising campaign ideas, I'd direct you to the Diocese of Ohio.  Their billboards included the message: "Love God. Love Your Neighbor. Change the World."  A church with that bumpersticker is one I'd be interested in trying, and so might my unchurched friends.

Musings on America's Got Talent

America's Got Talent ends up being one of the few TV shows I watch, mostly because watching doesn't require premium cable and Jane and Julia really like it.  The show is often interesting and occasionally even uplifting.  Yet as we watched this week's semi-finals, live from Radio City Music Hall, I was troubled by two thoughts which made me think about viewing habits generally.

The first question came during the judges comments to one of the acts.  A group of pre-teen boys performed
a dance that, I think, was meant to look sexy, macho, and perhaps even gansta-esque.  Watching them was bizarre and troubling.  More troubling though were the judges comments, which mostly ran along the "you are all so cute" lines.  The only judge who said the act was inappropriate and unpleasant to watch was Howard Stern.  Yes, Howard Stern!  Not for the first time in my AGT viewing did I find myself grateful for Howard's comments, both aesthetically and for how various acts could help themselves even if they didn't win the million dollars.  But I didn't expect to see him as the advocate for the integrity of our young people. I don't really believe that Howard is today's voice for morality and Christian ethics, but at least in this context he seems to be the voice of reason and responsibility.  Hearing the other judges' comments, I can't help but wonder if we have become so accustomed to seeing children on screen (and in real life) performing so inappropriately that it doesn't even register to most of us any longer.  The creation of such acts is troubling enough.  More tragic is when we no long realize why it is troubling.  Gratefully that particular act did not make it to the next round.

In the same episode, a sword-swallower was on, who also did not make it to the next round.  I don't know if I had ever seen a real sword-swallower before, but this gentleman from Moldova literally opened up his mouth, stuck a sword down his throat and did acrobatics.  This act is quite dangerous.  Howard noted that he had injured himself internally during rehearsals that week and couldn't eat for two days.  Some of the judges during the act seemed quite afraid that he would seriously hurt himself during the live performance.  As I was watching, I thought about how much responsibility I would have if he had hurt or even killed himself.  I think most of us when we watch a show assume that we can trust the producers' judgement to ensure we won't see someone die on live TV.  But that judgment may not be so good (see paragraph above).

It seems to me that we have some responsibility for the people we watch injure themselves for our amusements, whether we pay at a turnstile, buy the t-shirt, or just add to the ratings numbers.  I don't think we can just watch a professional football game without being aware of the toll concussions and other injuries have upon the players for the rest of their lives. (See, for instance, this report.)  I'm not sure that we can watch "reality television" and blithely ignore the emotional consequences on immature individuals who have their lives manipulated in front of millions for a chance to win a prize or launch an acting career.  While they may be free to choose to put themselves in those situations, if I help them along, I have some responsibility in where they end up.  If my money encourages them to self-destructive behaviors, I'm paying a portion of the ethical bill for the results.  If I watch a sword-swallower self-inflict serious injuries, not in a freak accident but in a somewhat probable outcome, I can't just shrug it off as a disturbing program.  I should be disturbed, disturbed enough to make better entertainment choices.

I am heartened that the voters and judges on America's Got Talent have not voted forward these or some of the other troubling acts.  And, after all, we can count on Howard Stern upholding standards of decency and appropriateness.
Posted by Adam Trambley at 1:32 PM No comments: