Episcopalians love to worship God.  In the first half of our General Convention, worship has been a highpoint at the beginning of each day.  The incredible gifts of people throughout the Episcopal Church have been laid at the altar for the glory of God and the welfare of God’s people. 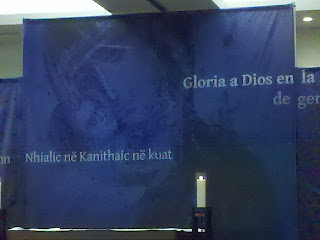 The technologically savvy among us have live-streamed the Eucharist even God's people not at Convention can join us.  (You can watch it every day at 9:30 at the General Convention media hub.)  The Association for Episcopal Deacons has written the Prayers of the People for each service, focusing on the day’s particular remembrance, celebrations and concerns, and they have fulfilled their accustomed liturgical roles.  The National Altar Guild Association has done a superb job of preparations for welcoming as many as 2,000 people to God’s table for communion.  A variety of people are walking around with headsets to coordinate communion flow and other logistics in a spacious hotel ballroom.  CM Almy has provided beautiful vestments.  A huge backdrop behind the altar contains a screened image of the icon of Our Lady of Vladimir and “Glory to God from generation to generation in the Church" in a number of different languages

The music for our daily Eucharist has been phenomenal.  An organ and choir has been supplemented by excellent cantors, flutes, brass, and other instrumentalists.  We have sung hymns from our hymnal, hymns from our supplemental hymnals, chants from Taize, and a wonderful Spanish Gospel Alleluia.  More than once, the organ has dropped out to allow us to hear hundreds of people singing together a cappella in four-part harmony.


On Monday, for the commemoration of Samson Occum who was the first Native American ordained minister and published author, a traditional Lakota singing and drum group, Red Leaf Singers, provided our prelude.  The readings for that day were also read in three different Native American languages. 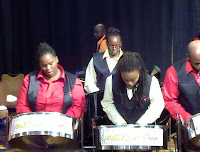 Last Friday, the commemoration of Harriet Beecher Stowe included the incredible music of the Steel Band Orchestra of St. Augustine’s Church in Brooklyn.  Their preludes and postludes included versions of How Great Thou Art, What a Friend We Have in Jesus, and Jesu Joy of Man’s Desire.  At the end of their postlude, the hundred people surrounding them called for more music (oh, that this would happen at the end of all our services).  They responded with another hymn before moving to Duke Ellington.  Probably no better way to start a day than by dancing with your brothers and sisters in Christ to spirituals, Bach and anything else that lifts hearts and mind to God.

The bishops and their spouse made up a special choir one day, as well.  One of the sacrifices many of them make is no longer being able to be part of a regular parish choir.  Nancy Rowley, our previous Bishop’s wife, used to love to sing with Trinity Warren's choir during her husband’s visitations.  Giving them an opportunity to enjoy singing together was meaningful, and sounded good.

While the preaching has been consistently inspiring, the highlight has been Bishop Michael Curry’s sermon on Harriet Beecher Stowe.  He challenged all of us to be crazy Christians.  His sermon can be found here, in video and text formats.  The Presiding Bishop has given two inspiring sermons, the House of Deputies' President Bonnie Anderson preached on courage, and we have heard a Blackfoot priest talk about revitalizing her small congregation.

Organizers have also tried to allow the wide range of people coming to worship together from throughout the country and throughout the world to participate in worship.  The Presiding Bishop has offered some of the prayers in Spanish, and the entire service is translated in real time into Spanish and American Sign Language.  French has also been used in worship, as well as Native American Languages and Hmong.  The Hmong are a nomadic tribe from Southeast Asia, some of whom were conscripted as soldiers to work alongside Americans during the Vietnam War, and later relocated to the United States as refugees.  The Holy Apostles Episcopal Church in St.Paul has a membership of about 700 Hmong.

Sunday is the largest worship service of convention and is also the In-Gathering of the United Thank Offering.  This ministry of the Episcopal Church Women encourages Episcopalians to contribute in gratitude for the good things God has done for us.  The UTO then provides grants to congregations in the US and throughout the world.  Part of Sunday’s offertory was a roll call of Episcopal dioceses to come forward and bring their thank offerings to the altar.
Posted by Adam Trambley at 11:28 AM