While everyone has plenty of responsibilities at General Convention, Episcopalians do have a sense of whimsy.  Below are a few examples.


The Supreme Executive Committee of Lent Madness is at convention, and they did not come alone.  Some of you are aware that during Lent, an on-line voting extravaganza among the saints for the Saints resulted in Mary Magdalene winning the coveted Golden Halo award.  On Friday, Mary Magdalene made an appearance at General Convention, and accepted votes for the first play-in match of the Lent 2013 contest.(Gregory the Great defeated Gregory of Nyssa after the on-line votes were counted.)

On the floor of the House of Deputies, many Dioceses have a mascot resting upon their standards.  The Diocese of Western New York includes Jamestown, home of Lucille Ball.   The Rev. Susan Anslow Williams of their deputation is also responsible for a daily cartoon in a convention  newsletter.  Last year in Anaheim, where stuffed Bambis were plentiful, our mascot was a roadkill deer.  This year, we were less inspired and just have a sheep.


Deputies on the floor are able to view the sartorial splendor of our Secretary, the Rev. Canon Dr. Gregory Straub. On Thursday, he was wearing one of his more subdued sports jackets. 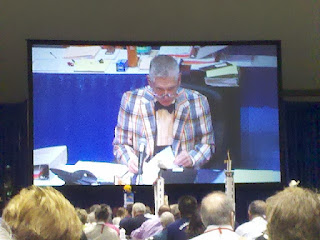 The Indianapolis Event following Sunday's Eucharist was a great opportunity for convention-goers to relax and enjoy.  The temperature was only in the 90's today (as opposed to 107 for the past two days).  The Diocese of Indiana held the event at their local baseball stadium, which is across the street from the convention center.  Lunch was ballpark fare, with clowns, jugglers, crafts and games.  Wildlife folks brought birds of prey, snakes and local animals.  The concourse around the ballpark included historical re-enactors, and, being Indianapolis, we had race cars, too.  Even Captain Kirk and Mister Spock made an appearance.  Everything was done in return for freewill donations to support the Diocese's work in Sudan, Brazil and Haiti.