The Exhibit Hall at General Convention

While the Bishops and deputies are busy discussing legislation, electing people to various things, and playing bonnie-ball, the rest of the church gathers together next door in the Exhibit Hall.  Dozens of purveyors of ecclesiastical articles, booksellers, interest groups, seminaries, missionary societies and other assorted Episcopalians offer their propaganda, buttons, sign-up sheets, candy, freebies, and any number of wares to the thousands of convention-goers and guests in Indianapolis.  If you want just the right theological tome, liturgical vestment, stimulating conversation, or way to spend the next few years of your life in a meaningful way, the Exhibit Hall is the place to be.

Unfortunately, the Hall closed yesterday, as it regularly does a few days before the end of convention.  With the shortened convention this year and the numerous active committees meeting from morning to night, attendance seemed lighter than in the past.  Here is a smattering of interesting places that caught my attention.

First mention goes to the Association of Anglican Musicians for the best give-away.  AAM's "organ pipes" are pretzel rods covered in caramel and chocolate with a musical note at the bottom.  AAM is a great organization, but I've had many more interesting conversations at that booth than I might have if their hospitality were not so "swell."

Episcopal Relief and Development had a booth at the front of the hall where they gave out coffee and a freebie connected to part of their mission.  One day's gift was a small vial of bug repellent, highlighting their major initiative to provide mosquito nets for malaria-plagued parts of Africa.  Of course, opportunities to learn about their good work and contribute were also present and to be commended. 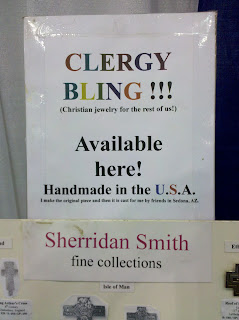 Those offering clergy bling and other items were too numerous to mention, but the photos give a small sample of their wares. 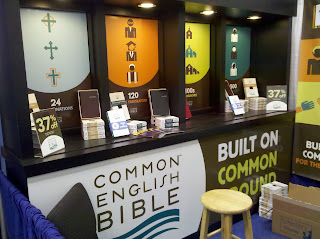 Interest group booths provided interesting discussion.  Never before had I heard someone passionately express why we need to return to the 1928 Book of Common Prayer.  She was across the aisle from someone promoting videos detailing involvement of Episcopal Bishops in slavery.  The Consultation, a collection of progressive groups such as Integrity, had a large area with comfortable places to sit, regular speakers and more papers to read than ecologically-minded Episcopalians would want to see trees killed for.

Almost every church organization was represented, including some of the less expected components of Christ's body.  Without claiming an exhaustive list, some that I saw are listed below with links to their websites:

Regardless of how much discretionary income we brought with us to General Convention, everybody is going home with a gift bag or two filled with complementary items and interesting purchases.  I personally don't expect to need another pen until I visit the Exhibit Hall at the 2015 General Convention.

Posted by Adam Trambley at 1:02 PM