It was evening and it was morning...the first day

Wednesday, July 4
The first of the Episcopal Church's General Convention started for me at 8:00am Wednesday in the parking lot at Bella Cena restaurant off I-80.  Jim Steadman picked me up for the six hour drive from Sharon to Indianapolis.  We arrived just in time to get registered, and spent a few hours in the House of Deputies orientation session.  After learning the intricacies of this year's electronic voting devices, receiving admonishments to always identify ourselves at microphones, and learning how to open metal three-ring binders while making a minimum of noise, we adjourned to various legislative sessions at 5:00pm. 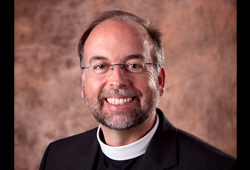 Since I was elected as our diocese's first clergy alternate, I was not assigned to a committee this year.  I was free to attend the evening's meeting for the legislative committee on the Consecration of Bishops.  Their business that evening began with consideration of the Rev. Jeff Fisher, who had been elected as Suffragan Bishop for Texas.  Jeff was a classmate, and next-door neighbor, at seminary.  He has a true pastor's heart, loves Jesus and the people around him, and walks with great humility.  As a CPA and former CFO, he also knows how to get things done.  He is ideally suited to be a bishop -- prayerful, loving and competent.  Seeing he and his wife, Susan, again, was a great joy, and the committee unanimously recommended that his election be confirmed.  The House of Deputies will likely vote on it tomorrow.

Also present at the hearing were about a half-dozen other seminary classmates.  Probably the greatest joy of General Convention is reconnecting with beloved friends who are now scattered across the country, and sometimes the world.  The conversation went from the hotel hallway to a local Italian restaurant for dinner.

Having conversations about what is happening in other churches in other places fosters ideas, perspectives, and a great sense of gratitude for the ways the Spirit is working in every time and place.  Sometimes these chats come with old friends, sometimes with a co-worker from a committee last convention, often with the person staffing a booth in the exhibition hall, and not infrequently with someone who looks very familiar but I can't quite place.  The large nametags we all wear are very helpful, especially in those latter situations.  We in Sharon, PA don't often realize, for example, the ways that some Episcopal Churches now have separate worship services for Sudanese refugees in their own language.  Or how some churches along the Gulf Coast had been almost wiped out by hurricanes and have been revitalized with entirely new ministries.  Or that one parish started publishing lectionary materials as a ministry that is now benefiting the entire church.

After dinner, a check of e-mail gave some good news.  The Program, Budget and Finance Committee decided to use the budget from the Presiding Bishop as a template for their work.  I've blogged about the pluses of that proposal here.  They will rightly make numerous changes based on the input of the entire convention, but our church's next budget will be organized around the five marks of mission.

At 8:30 pm, I gathered with a number of other folks to discuss structural reform proposals.  The best idea seems to be the appointment of a special commission to look closely at structural issues and make recommendations for the next convention.  While creating a commission might not look like doing very much, one of the key components of its success would be involving people who aren't part of convention.  General Convention will have a much harder time figuring out itself how to simplify and eliminate some of our structures than if we include people looking at it from the outside in the conversation.  Hopefully a special commission can also access the expertise of people who have studied organizational structure.  They have spent their lives looking at issues that we might not otherwise think of, and we should ask for their help.  The hearings on the Committee on Structure is holding on these issues will occur tonight at 7:30pm.

The city's July 4th Fireworks could be heard and seen from the hotel before bed.

Thursday, July 5
The day's first legislative session was 8:00-9:00am to organize the House of Deputies.  This organization involves electing officers and making sure all staff is in place.  At 9:30, the opening eucharist began.  Like most of the services at General Convention, part of it was conducted in English and part in Spanish.  The Presiding Bishop preached about three saints from the late 1800's to early 1900's who worked to transform social structures to help people live into the Kingdom of God.  The experience of about 1000 people singing together is always amazing, even in a hotel ballroom set up about as nicely as possible for a large worship experience. 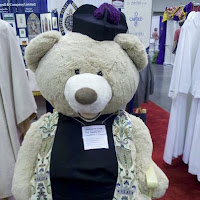 After the Eucharist, I took a quick stroll through the exhibit hall.  While I only began to scratch the surface of the interesting programs, purveyors of ecclesiastical articles, and advocacy groups represented, I did drop a business card into a hat to see if the Bearly Rev. Theodore J. Wippell might be called to a ministry to Saint John's Sharon (probably either Special Adviser to the Rector or Pastoral Associate for Nursery Care).
Posted by Adam Trambley at 9:30 AM