This is the sixth of nine daily blog posts from our Diocesan Mission trip to Santiago, Dominican Republic from July 21-29.  I'm posting one a day now that we have returned to the states.  A daily bog from others of our team can be found on our Diocesan blog: http://dionwpa.org/telling-our-story/the-forward.


July 26
Today is Wednesday, the halfway point of our Bible School and Eye Clinic and about two-thirds of the way through the trip generally.  Today was also a day full of various surprises.

At breakfast, the eleven of us usually eat together seated along both sides of a row of small tables that have been pulled together.  This morning, two other people were seated with us, and they had some unfamiliar Dominican food.  When we asked about it, the proprietor of our hotel and the hotel’s restaurant, whose name is Lazarus, offered some to us, as well.  Fried cheese was tried by some, but I had mangu (mashed plantains), which were very good.

When our minibus arrived, we found out that our translator was sick today and wouldn’t be with us.  Bible School went well, thanks to the great local teachers who teach the Bible lesson and have everything organized.  For our games, we repeated some of the children’s favorites so we didn’t need to do detailed explanations, and the craft of the day was making bracelets.  We also have a few middle school children who help us.  Since they now know what is going on, they help to keep things moving along, as well.  When Julia and I taught music this morning, we got the children singing in English, which they enjoyed.  We have been working on a song, Sing Alleluia to the Lord, in Spanish for the past few days.  Now that they know the tune, today we taught them the English words. 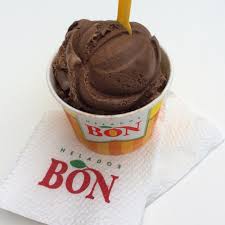 After lunch, we were a little more concerned about getting the Eye Clinic running smoothly without a translator.  Father Hipólito said someone was coming, but she wasn’t here by the time we began.  All the Spanish I could muster was put to good use, and we managed to get one client her new glasses before the translator arrived.  She just graduated from high school in the Bronx, but comes to Santiago where her mother’s family lives every summer and is here for a month.  She was a great help.  Hopefully, we’ll have two translators tomorrow and things will run even more smoothly.  Our young helpers have also become very adept at explaining how to read eyecharts to our clients! 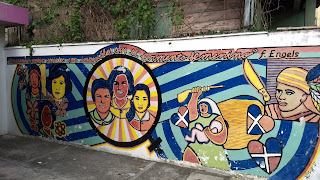 When we returned to the hotel, we walked about three blocks to a local ice cream shop, Bon.  The ice cream was delicious, and the ladies behind the counter seemed to enjoy having some foreigners drop in.  On the way, we also came across a mural on the side of a building with a quote from Fredrick Engels: “Great social change is impossible without the women’s uprising.”

One surprise this evening was that I saw my first tarantula in the wild.  And by “in the wild”, I mean, “in the hallway of our hotel.”  I did not share this with my fellow missionaries since the fewer freaked out people the better, and as much as I am trying to get my own freak-out quotient to zero, it isn’t quite there yet.  A Dominican woman in a room down the hall saw it in the corner of her door, and said, fairly calmly, “tarantula.”  I think she also said something else that may have meant not poisonous or dangerous (at least that’s what I’m hoping).  She took off her shoe and batted it onto the floor.  Then, before she could stomp it, the thing booked across the floor at a speed at which I have never seen such a critter scamper.  Of course, it was the size of a medium-sized mouse with eight legs about two inches long, so I probably shouldn’t compare its movement to the average daddy-long-legs.  I think I will be double checking my suitcase and backpack before I take them anywhere from now on.  (I didn’t have time to take a photo and I’m not googling tarantulas.  If you want to see some, dear reader, you are on your own.)
Posted by Adam Trambley at 10:50 AM