This is the last of nine daily blog posts from our Diocesan Mission trip to Santiago, Dominican Republic from July 21-29.  I'm posting one a day now that we have returned to the states.  A daily bog from others of our team can be found on our Diocesan blog: http://dionwpa.org/telling-our-story/the-forward.

July 29
If you are reading this, I have made it home.  As I write this, however, I’m not as sure.  I’m at the Santiago International Airport waiting for our flight, which had been delayed 2 hours waiting for the plane we are supposed to be leaving on.  Right now, we are schedule to arrive in Newark 15 minutes before our flight to Pittsburgh takes off. 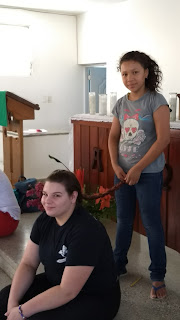 
Our good-byes were difficult.  Over the week we have worked closely, and lunched daily, with a great group of teachers and others who help out at the church, including the “gatekeeper,” who had all the keys and locked and unlocked everything for us. We also developed great relationships with Randy our translator, Lazarus who ran the hotel we stayed at, the children of the teachers and others at the church, and Father Hipólito.  I think everyone on the team would love to come back next year and see our new friends again.

Post Script
We did make it home.  We landed in Newark about 10 minutes before our flight to Pittsburgh was supposed to take off but, thanks be to God, it was delayed about 50 minutes and was now to take off at 9:10pm.  So we moved as quickly as we could through immigration, customs,  and to security.  When we looked up, the flight had been delayed until 9:15pm, and those five minutes were an answer to prayer.  Going through security, not only did the X-ray machine in our line break, but they were particularly interested in our diagnostic equipment.  Our vanguard ran to the gate -- on the other side of the terminal -- to fall down and tie their shoes in the doorway if need be.  When all but the last two people had made it, we talked to the gate agent, who said that he had to close the doors in less then five minutes.  Then the last of our company arrived and we got on our aircraft in those final minutes between 9:10 and 9:15pm.  Thanks to all those praying for safe travel and a good week! 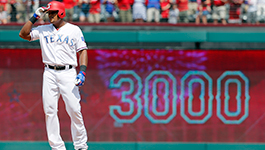 The day after we got back to the States, Adrian Beltre became the first Major League baseball player born in the Dominican Republic to reach the 3,000 hit plateau.  It is probably unrelated to our trip, but still a nice postlude to spending a week in his homeland.
Posted by Adam Trambley at 6:14 AM