First Who, Then What, Then How -- TREC and Networks

The Task-Force for Reimagining the Episcopal Church recently put out a study paper on Episcopal Networks and requested responses.  Here is my contribution to that conversation.

I am initially disappointed by the length and difficulty in reading the study paper.  For example, I don't really understand why we need an entire treatise on sin in this document.  Certainly all of our networks, ecclesiastical and otherwise, have fallen short of the glory of God, but so much energy is taken up by going down background rabbit holes that I couldn't even bring myself to read the entire paper the first two times I looked at it.  I can't help but wonder how many interested people never found the time to wade through the document in the midst of the rest of their lives.

My more serious criticism is that the document doesn't seem to have a sense of why networks exist.  Networks exist because people want to accomplish something and they decide a network is the best way to do it.  If a centrally organized top-down network is effective, that is chosen.  If a loose spoke-less network makes sense, they go with that option.  If people need more social interaction, a model that involves cocktail parties is selected.  If people want to compare saints in a way that lets thousands cast ballots for one over another, we get a web-based Lent Madness.  No type of network is necessarily better than another or theologically privileged. A good network is one that accomplishes its goals, and a better network is one that accomplishes its goals more effectively.  TREC's four-tiered system may be an interesting description of different types networks, but their sense of hierarchy among them is not helpful. 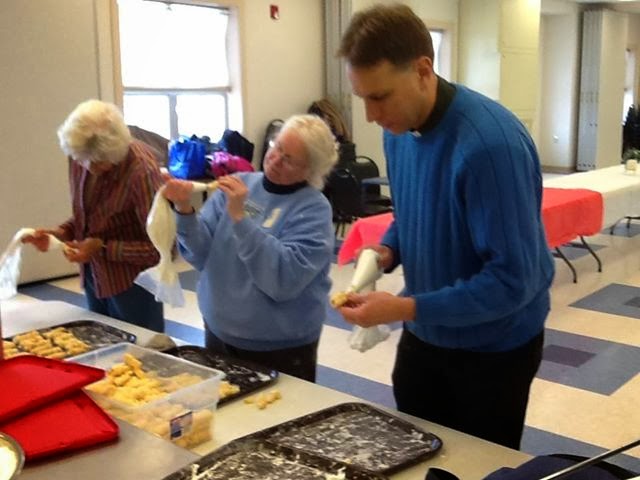 Let me offer two examples from what the document would call Network 1.0 and 2.0 (which is a false dichotomy).  My parish Episcopal Church Women do much good, including raising thousands of dollars through rummage sales and cookie baking for important causes.  They are an entirely traditional network with no social media sites and most connections made via (probably rotary) phone lines.  But what they do is effective and works.  Conversely, a teenager in my church just raised $1,500 via Kickstarter to publish a book to help other teenagers like him write iPhone apps.  Many people in the parish got together and supported him through what is probably a network 2.5 model.  His network was also effective, even if none of the ECW members saw it.  Are there issues about viability and sustainability here?  Yes, but actually with both networks.  ECW probably can't continue all their work the way they are doing it, but other groups that connect in other ways are filling in gaps that the ECW would have done 50 years ago. At the same time, if our teenager doesn't have another book idea, his network will not have other work, no matter how cool his technology.  The goal is not to find the right Platonic form for the Episcopal network of the future.  The goal is for people who want to accomplish something to use a network that works for them.

The biggest problem in my mind for the Episcopal networks is that we have reversed the process that makes networks work, and this troubling reversal runs throughout this study paper.  To repeat what I said earlier, networks are effective when working in this order:
1. People
2. Have a goal and then
3. Create a network to effectively meet that goal

Most of our ineffective Episcopal networks fail because at this point we have:
1. Created a network (like a task force, committee, or board)
2. With a purpose determined by some third party (like General Convention or a bunch of people that first created the network 50-150 years ago but are now dead) and then
3. Find people to fill the network.

Many of our ineffective CCAB's don't function properly because we begin with a structure (including a budget), give them a mission that may or may not be anything anybody really wants (like creating more General Convention legislation and reports), and then we look for people willing to participate in the network.  Using different technology is not necessarily going to make a CCAB more effective.  Instead, what will work is allowing people to identify their goals and then have access to the networks that will help them meet those goals.  In some cases these will involve technological connections that haven't been invented yet, and in some cases someone just needs to get folks together for a long lunch.  The network depends on who is involved and what the goal is.

First, TREC could work out some sort of process that allows all of our church networks to determine if they are institutionalized networks looking for people to fill them, or if they are the clear result of people trying to accomplish a specific purpose.  If a CCAB or other budgeted Episcopal network can't identify the individuals who are trying to accomplish something specific through them, and if those individuals are not involved in their work, that network is no longer functioning effectively, and no amount of restructuring is going to save it.  Identifying and eliminating these legacy networks would be a great step forward.

Second, TREC could recommend reducing the TEC budget significantly so that legacy networks are no longer supported.  This move would allow individuals who do have the vision, energy and inspiration to  to devote more of their resources to effective networks they are invested in.  Here I am not advocating another layer of funding bureaucracy, but actually taking in significantly less money so that resources can go into participatory networks directly instead of being funneled through TEC's budget.  Of course, those networks that are currently effective could also be supported directly by the people involved instead of via the TEC budget. (On a side note, most new effective networks cost much less than ineffective legacy networks).  Individuals with a passion who felt called to do important work created the effective networks in the church, whether we are talking about the 19th century missionary societies, the 20th century networks that were once effective but no longer are, or the current networks like Episcopal Cafe that don't have a church budget line item but are making a difference.

Let's keep our focus on what has always worked:  First Who, Then What, Then How.

For another take on the TREC report, you might also want to read Crusty Old Dean's blog post.