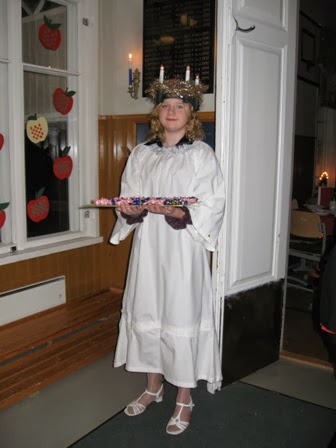 I was preparing a sermon today for a weekday commemoration of Saint Lucy, and it got me thinking.  Her feast day is December 13, which was the shortest day of the year until the calendar reforms in 1582.  Since Lucy means "light", her day was celebrated with great enthusiasm, especially in Northern Europe, where short days were very short and the increased daylight is desperately anticipated.  Most commonly on St. Lucy's day, a girl dressed in a white robe and wore a candle-bedecked wreath on her head while distributing treats to the family.

The tradition of St. Lucy's life is in many ways a classic virgin/martyr story.  The daughter of nobles in Syracuse, Sicily, Lucy refused to marry the suitor presented to her.  The spurned gentleman, as if to prove she made the right decision, denounced her as a Christian to authorities during the reign of the Emperor Diocletian.  The governor first sentenced her to a brothel, but she became so heavy that she could not be moved there, even by a team of oxen.  Authorities then attempted unsuccessfully to burn her to death, before killing her with a sword.  Other traditions note that her eyes were gouged out, either by authorities as torture  or by Lucy herself to dissuade her suitor who found her eyes especially attractive, and that God later restored her eyes.  Different sources also note dreams, visitations from St. Agnes, a miraculous healing of her mother, the distribution to the poor of her potential inheritance, and the early dedication of her life to God.

Like many traditions of the virgin/martyrs of the church, the teaching about them seems to focus on their confession of a Christina faith and their (usually sexual) purity.  We should hesitate to read too much dogma back into their convictions, however, or equate their purity with whatever we want to find in our teenagers so they don't have sex until they are married.  Many of our traditions, Lucy's included, begin with rejecting an unwanted marriage, and the horrific consequences of that refusal.  Their Christian confession and purity are different components of an integrated personality strong enough at an early age to decide that their entire being, including their sexuality, is only to be used in life-giving ways.  Spurning an inappropriate mate (due to age, cruelty or lack of faith) falls squarely within the boundaries of a strong Christian moral ethic.  Other integrated Christian souls made no-less-holy decisions to marry into situations that allowed them to serve God while raising families.

The witness of those like St. Lucy is powerful in ways that are desperately needed today.  At a time when the internet and global travel has increasingly made sexuality a commodity, Lucy is a witness to God's concern and salvation for victims in those situations.  God intervened directly to prevent Lucy from being forced into a brothel, just like he worked indirectly through Saint Nicolas who provided money for dowries so three girls wouldn't be forced into prostitution.  Respecting and protecting the sexual purity of the innocent and the sexual integrity of the perhaps non-so-innocent are both fundamental responsibilities of the church, of society, and of all men and women of goodwill.  Saints like Lucy shine light into the darkness of sexual exploitation and human trafficking, whether of the Roman, medieval or modern varieties.  Whether the problem is rich ancient patricians or drug-offering pimps, God cares deeply for young women and men caught in the clutches of those who would use them for profit and pleasure.  The church today would do well to emphasize once again the life of Lucy as a call to action for Christian men and women, and even more as a source of good news to victims of trafficking desperately waiting for deliverance and healing.