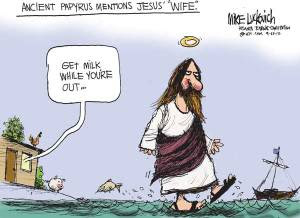 The discovery of a piece of papyrus which quotes Jesus as referring to his wife is causing some interesting discussion. (Click here for more info from the New York Times and Harvard Magazine.)  The humorists are probably having the most fun, from editorial cartoonists to bloggers offering Top Ten Reasons Not To Be Jesus Wife.  Other discussion, especially in the Roman Catholic Church, center around ordination.

As Dan Brown's readers know, this is not a new idea, but when we find something ancient mentioning something heretical, we tend to re-evaluate our suppositions.  In this case, however, we needn't run to check the divine wedding registry at Bed, Bath and Beyond.

First, the fragment of text found is quite small, approximately the size of a business card, with a small amount of text.  We don't know what the entire document was, or would have said.  We don't know who wrote it or why, even if the dating is authenticated as suitably ancient.  Second, people in ancient times were about as likely to write bizarre things as modern authors.  Just because a long time ago someone wrote that Jesus said he was married doesn't mean it's true.  One early writing that stirred up a similar storm of controversy in recent years was the appearance of the Gospel of Mary Magdalene.  Some wrote about how its exclusion from the canon suppressed women's voices by only allowing male evangelists.  However, having read it, I know I wouldn't want it as part of my Bible, and neither would the vast majority of feminists I know.  It's gnostic theology seems more akin to Scientology than a liberal Catholicism.  Any direct connection to Mary Magdalene herself seems a huge stretch, as well.

The more interesting question is why so many people seem invested in finding a married Jesus.  For many, it make allow them to feel closer to a Messiah who understands their day-to-day struggles.  The larger segment of published reactions, however, seems to come from those wishing to change Roman Catholicisms ordination requirements.  As long as a celibate Jesus is held up as the priestly model, then if Jesus could be proven to be married, so should priests (who could also then probably be women, too)?  But this argument flounders in its premise.  We know Peter and other apostles were married, and the Roman church recognizes married clergy, it just doesn't currently allow it for the majority of its priests.  The change in their ordination requirements, as difficult as it will be, is probably easier than proving someone was married 2000 years ago, anyway.

But what might be at stake theologically if Jesus were to have been married?  Nothing really.  The Son of God is still the Son of God who brought near the Kingdom of God, reconciled us to God through his death and resurrection, has ascended into heaven and is seated at the right hand of God the Father.  If he was married, he still did all those things.  A number of factors are highlighted by Jesus' presumed celibacy, however, and they are worth noting.

First, a celibate Jesus with no children is a powerful witness against an understanding of salvation or election that can only come through blood ties.  When many looked to ancestry for standing and identity, Jesus said my family is anyone who does the will of God. Christ's Church as the Household of God open to every race, tribe and tongue is absolutely central to orthodox Christianity.  Dan Brown's fictional search for Jesus descendants as a special people is a good argument of why Jesus wouldn't have had a family, lest people believe that somehow being a blood relative of Jesus is more important than sharing in his body and blood in the Eucharist.

Second, we can only imagine that Jesus' understanding of his own mission would have been such that he might not have wanted to bring a wife along.  We get glimpses in scripture of the pain his mother experienced during the way of the cross.  I doubt Jesus would have married someone if had a sense of the pain he would put them through.  Jesus concern from the cross for John and Mary to take care of each other, with no mention of a wife or children, is a good scriptural argument for his celibacy.

Finally, Jesus celibacy speaks to a world that doesn't understand the gift of singleness.  Certain people are gifted to live without family responsibilities for the sake of serving the Kingdom of God.  Everyone is not required to do this, but some are able and we need their witness and their service.  They are equipped to serve in ways that others aren't.  Especially in a culture that sees sexual gratification as one of the goals in life, a life of celibacy devoted to using all one's energies for a higher purpose is an important example.  It is not the only way to live a godly life, but those who are called to such a countercultural lifestyle can use all the positive examples they can get.

In the end, whether Jesus was married or not isn't all that important, but I don't find any credible evidence that he was married.  The credible evidence says that he died, that his disciples found the tomb empty, and that the resurrected Jesus and his Holy Spirit have been transforming lives ever since.
Posted by Adam Trambley at 2:05 PM