July 5 evening
During the afternoon legislative sessions, I testified in the Evangelism Committee against a piece of legislation encouraging more licensed lay evangelists.  I strongly support evangelism.  But I thought this was an example of the kind of legislation that takes too much of the church's time, adds too many layers of bureaucracy, and gets in the way of letting people go out and use their gifts.  Of those speaking, I was a clear minority, but we still don't have a definition of what a lay evangelist should be doing, or why that task would be different from the responsibility all of us have for evangelism.  Instead of challenging dioceses to license more lay evangelists, we should probably help dioceses to develop whatever evangelism programs would be most fruitful for them.  Most of the people in my parish who have been the most effective evangelists would be unlikely to see themselves that way, and wouldn't be very interested in going to a licensing training.

The afternoon featured the first legislative session of the House of Deputies where we handled legislation.  In one of the few times in my three conventions, we also finished all the business before us for the day.  Whether this was a testament to the fine planning of Dispatch of Business, a reduced need for deputies to hear themselves talk, or a slow feed of legislation from committees, I'm not sure.  But it was good to finish the day's calendar of events. 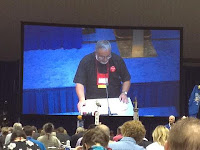 Legislation that passed the House of Deputies (and now will go to the House of Bishops) started with some general business, rules of order and scheduling matters.  We consented to Jeff Fisher's consecration and requested that Program, Budget and Finance put $300,000 in the budget to support the Episcopal Youth Event.  Fr. Denny was chair of the committee that brought that legislation, and he got to present it to the house on the big screen.

In one of the many political resolutions that will come before the convention, we urged the United States to allow domestic partners of lawful permanent residents to seek lawful permanent resident status in the same way as different-gendered spouses.  While not a big issue in Northwestern Pennsylvania, this issue is significant in other parts of the country.  Some churches are losing key members as couples are forced to leave the United States.  I would also say, in agreement with the majority, that we have a moral obligation to help keep families and loved ones together, and our immigration policies should allow that to happen.

The Deputies voted down an piece of legislation that would have called upon us to make our churches more loving toward older people.  After two mature deputies said the resolution offended them, the resolution was soundly defeated.  Surprisingly, we did not feel that this is the biggest problem in the Episcopal Church today.

After the legislative session, I went to sign up to testify at the Structure Committee's hearing on a slew of resolutions concerning significant reform.  Bishop Rowe, Jim Steadman and I all testified in favor of a special commission.  Bishop Rowe asked us how our current situation is working for us and asked us not to think outside the box, but to realize there is no box.  Deputy Steadman suggested we stop driving a '52 Buick by looking through the rear-view window. (Jim also provided the photos of Fr. Denny above and of the structure committee to the right.)  About 40 deputies spoke for 2 minutes on the need for significant changes in how we do business.

During the evening legislative session, I also popped into the Pension Fund hearing on the church's health plan.  Most of the important concerns about cost and flexibility were raised.  One cathedral church spoke of having to lay off their sexton because they couldn't afford to pay a health care package and the new rules required it of a full-time staff person.  What we thought we passed at the last General Convention regarding health care does not seem entirely congruent with what has happened.  Hopefully something will get changed. 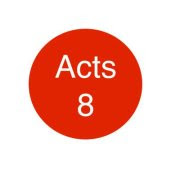 At 9:30pm, I went to a meeting of The Acts 8 Moment.  Scott Gunn, Crusty Old Dean and Susan Snooks put this together just to get people thinking and dreaming about what God might be up to and where we are going as a church.  They had no agenda.  After some opening remarks, we did a short Bible study on Acts 8, where a serious persecution of the church results in people scattering, proclaiming the gospel and great joy.

The most powerful moment at Convention so far was when they opened the microphone and allowed people to come up and finish the sentence, "I dream of a church where..."  As a couple of dozen people finished that sentence, the presence of the Holy Spirit was palpable.  People were dreaming of a church that was expansive of God's people and creation, that was effective, that was transformed and that was transforming others.

As the session closed, someone stood up and talked about looking for new leadership and someone else suggested drafting new resolutions.  After planned program was over, some people gathered to talk about leadership, some to look at legislation, some to look at taking this vision to parishes beyond convention, and some of us gathered in prayer.  When people went from our vision to the politics of convention, the energy shifted noticeably.  I'm not sure whether it was coming down the mountain to get to work or if it was a God-moment being pulled back down into the morass of anxieties over the present day, or maybe both.  But people in this place have a deep love of God, Jesus, our church, and the ministry God has given us to do.  As we keep praying and dreaming, God will lead us into it.


For those keeping score at home...
The Episcopal Church provides two web sites to follow along at home.  Anyone can go to the General Convention Media Hub to get a live stream of worship services, read twitter feeds, and see a variety of other goings-on.  The General Convention site is the legislative geek treasure trove of resolutions, committee hearing schedules, and the place to see the broad range of issues General Convention will probably address in the next week.
Posted by Adam Trambley at 6:20 AM