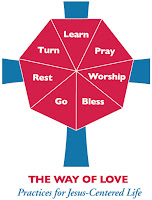 I have just returned from The Episcopal Church's 79th General Convention in Austin, TX. While much happened in the almost two weeks I was there, I wanted to share a few highlights. (For a fairly comprehensive set of articles and news reports about what happened day by day at convention, go to Episcopal News Service or the House of Deputies news. Total church nerds interested in seeing what happened to particular resolutions, the budget, or other legislative items can look at the General Convention virtual binder.)

1. The Way of Love.  In his sermon at our opening Eucharist, Presiding Bishop Michael Curry introduced the Way of Love.  This seven-step path offers a rule of life that helps us walk in love as disciples of Jesus Christ. The seven step: Turn, Learn, Pray, Worship, Bless, Go, and Rest are all designed to develop our capacity to walk along our own way of love. 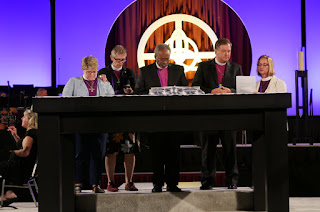 2. #churchtoo. Two important activities happened during convention to make the church a safer place for everyone, especially for women and others who frequently experience abuse, harassment, and discrimination.  First, the bishops held a listening session embedded in a liturgy.  They solicited stories of abuse, harassment, and discrimination from a wide variety of people. A number of those powerful stories were read aloud.  Second, the House of Deputies Special Committee on Sexual Harassment and Exploitation brought together more than 50 women who addressed issues of theology and language, structural equity, clergy discipline and training, truth and reconciliation, and social justice for women through a series of concrete resolutions designed to make the church a safer, more equal, and more just place for all people.  Many of these resolutions were enacted by convention. (Church nerd alert! If you want to see the final disposition of the committee's resolutions, I've noted it at the bottom of this post.)

3. Texas Revival. On Saturday night we were treated to a Texas style revival. The Presiding Bishop preached, a couple thousand people showed up, and at the end of the service people were invited to go to numerous prayers stations surrounding the auditorium.  The sense of the Holy Spirit showing up was palpable.  One person in our deputation told us afterwards that there was a row of people behind her who had come to hear the "Royal Wedding" preacher.  When the invitation to prayer came, she heard them talking about wanting to go for prayer, but not knowing how and not feeling like they were really allowed.  So she turned around and offered to pray with them right there, an invitation they gratefully accepted.  They prayed, among other things, to accept Jesus into their lives that night. 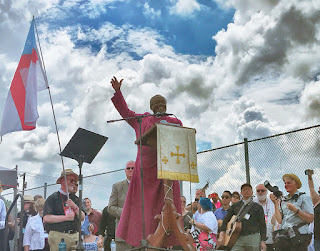 4. Prayer Service at Hutto Detention Center.  Austin isn't particularly close to the border, but a half-hour ride from Austin is the T. Don Hutto Residential Center, which holds women who are trying to immigrate into the United States.  The Center's residents includes women separated from their children and families, and it has a history of incidents of abuse by guards. The Reverend Megan Castellan and others organized a noonday prayer service at a ball field adjacent to the detention center.  Readings and prayers were offered in English and Spanish, and Bishop Curry preached. Afterwards a letter was received from women inside the Center saying that they watched until the last buses departed, grateful to know that they were not alone. (To support the ongoing work with women at the Hutto center, go to grassrootsleadership.org.)

5. Budget. We passed a budget. Among other noteworthy items is $3 million to continue the work of church planting and evangelism begun three years ago.  This work has proven effective, and we expect even more fruit as we increase our investment in this area.

6. Prayer Book and Liturgy. Much discussion going into Convention centered around proposals for beginning work on a new prayer book. In the end, in substitute resolution A068, Convention decided not to begin that work immediately, but to create a Task Force on Liturgical and Prayer Book Revision (TFLPBR - pronounced "tafel-puber"?).  This task force will look at and propose structural ways for the church to be more adaptive in its future worship life to a wide variety of needs. At the same time, diocese are encouraged to create liturgical commissions that will experiment and create liturgical texts appropriate to their circumstances as resources for the church going forward. Convention also said that the 1979 Book of Common Prayer will continue to be used going forward and that any liturgical revisions will adhere to our Anglican tradition and the Baptismal and Eucharistic theology of our current prayer book. Importantly, we also allocated funds for new, dynamic-equivalence translations of the Prayer Book and other resources into Spanish, French, and Haitian Creole.  In a separate resolution, inclusive and expansive alternatives for Prayers A, B, and D in Rite II were adopted.  (For more on this Convention decision, see Derek Olsen's post.)

7. Same-sex blessing and marriage rites.  Rites for same-sex marriage have now been authorized for use throughout the church, with provisions even in dioceses where bishops have previously forbidden their use.

8. The Pigeon. OK, @gc79pigeon was not a particularly important outcome of Convention, but it did provide some needed comic relief along the way.  Thanks to the Reverends David Sibley and David Simmons for their sense of humor and good work.

Given all the hard work by so many people on so many issues, I am sure I have missed more than one important Convention item.  Thanks to everyone behind the scenes who made Convention happen this year, and kept the work of the church moving ahead for another triennium!