This is the seventh of nine daily blog posts from our Diocesan Mission trip to Santiago, Dominican Republic from July 21-29.  I'm posting one a day now that we have returned to the states.  A daily bog from others of our team can be found on our Diocesan blog: http://dionwpa.org/telling-our-story/the-forward.


July 27
This evening, I was struck by the difference between three roofs.  Roofs here are often flat and used for storage or as an additional “outside room”, or are slightly pitched with corrugated metal to keep rain off. 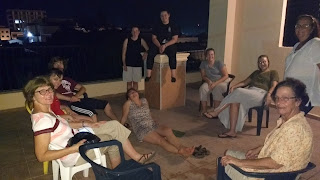 Each evening we go onto the roof of our five-story hotel to say evening prayer and share about the day that has passed.  The roof has a covered party room, locked with a metal gate, and an open area where we set up a circle of chairs and talk.  The hotel itself has some interesting features from a US perspective.  The rooms have air conditioning and TV’s with an extensive cable/satellite package of Spanish and English programming.  Wifi, however, is only available in the small foyer at the bottom of the stairwell and the dining room, and common areas have no air conditioning.  There is also no hot water at night, but whether that is because the hot water is heated outside during the day by the sun or whether people have used it taking showers in the evening is not clear.  Overall, the Hotel Colonial has been a wonderful place to stay this week, and its roof has been a great place to feel the evening breeze, watch the local historical monument change colors, listen to the sounds of the street, and build our missionary community. 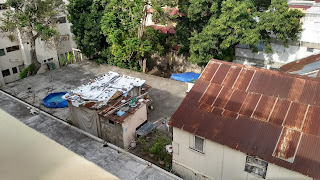 The second roof is the building next to our hotel.  The part of the building near the street rises up three stories, but the back of the building is only two with a flat roof.  On the flat roof are two structures that can best be described as square huts, each about the size of a room – one larger and one smaller.  A family of at least five people seems to live in these two structures, mostly inside at night, but spreading out over the roof during the day.  They even have a small children’s swimming pool that they were playing in one afternoon.  They seem to have electricity, but their situation is a far cry from the land of three-star hotels. 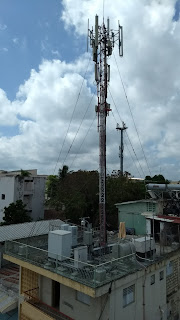 The third roof is directly across the street from the second one.  A not very high, but very new-looking cell tower rises up off of it.  Numerous modern electronic gadgets fill the roof.  It resembles, on a smaller scale, the roofs of the skyscrapers in US cities, at least, that’s what I thought at first.  Then I went up to take a picture of it and I couldn’t.  An older woman was sitting in the doorway to the staircase watching her sheets that she had hung on wires between the electrical equipment dry. (I assume the lines were put up as clothes lines and weren’t any of the wires connecting the cell phone tower paraphernalia.)  Taking a picture of her and her laundry without permission seemed wrong, so I waited and got a photo of only the “modern” roof.  Seeing these various parts of Dominican life side-by-side, and roof-by-roof, says a lot about the way of life on the island here.
Posted by Adam Trambley at 10:20 AM