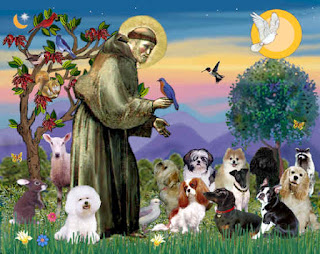 OK, so the trendy October celebration at an Episcopal Church near you is a blessing of the animals for the Feast of St. Francis (October 4).  One near-by parish had llamas, as well as the regular cats, dogs, hamsters, guinea pigs and black giraffes.  Alas, St. John's did not intend to welcome God's furrier friends this past Sunday, but it seems St. Francis has other plans.

After the 8:00am service, an usher came to the sacristy and said that someone was here to see me.  When I got to the lounge, a young man I'd never met before told me his story.  He lives in a nearby apartment, one which doesn't take pets.  Saturday evening, when he opened his front door, a beagle ran inside.  It had a collar on, with a broken lead attached.  He spent the night in his car with the dog, but he needed someone else to help him so he could go inside with his wife and 16 month-old son.

At this point, the little voice in the back of my head told me, "You're taking home a dog today."  I knew I would try every other alternative and probably have many reasons not to make this my problem, but it wasn't going to matter in the end.  After talking to dozens of people at church, having our new friend drive the dog to the Agway that might take it, and making any number of calls, the man went home to his family and my wife and daughters went home with the beagle.

The dog, who we eventually named Buddy, was quickly overwhelmed with our snoodle Heidi, so they stayed on opposite sides of a baby gate.  Every time I walked by, Heidi tried to jump into my arms to make sure I knew who was the primary dog in my life.  Then last night, because we are total softies, my eldest even slept down in the family room with Buddy, who is apparently quite a cuddler.

We had left messages yesterday for all sorts of people, and called the police and some others this morning, seemingly to no avail.  No one in town had lost a beagle.  During a parish funeral, we almost convinced the local Disciples of Christ minister who was assisting with the service to adopt him.  Then this afternoon we got a call.  A woman who runs the rescue where we had gotten our dog had gotten a call from someone whose beagle ran had broken a new lead Saturday night.  We had left a message for her earlier hoping that she had space to take the dog, but she didn't.  Instead, she was the person who got the call from Buddy's dad.  My wife talked to him, and we met him at the church to return Petey (which turned out to be Buddy's real name).

On Sunday morning, the man who brought the dog said something interesting to me.  After we spent an hour or so looking for a solution and not finding any, he said, "I went to a nearby church, and the preacher just told me, 'We don't help with that.'  But you are willing to spend the time and try and help."  Now, I can totally understand a church with a clear boundary between it and an animal shelter.  At the same time, here is an unchurched person coming Sunday morning trying to do the right thing and having slept in his car all night to do it.  The way he's likely to feel the love of Jesus is finding some Christians who care as much as he does about this stray dog.  I'm not sure if he'll be back to church or not.  If he does, we can probably learn something from him about hospitality and care.

I'm also struck that the connection with the dog's original owner was one we were positioned to make.  Somehow we were an important link in God's return of a prodigal, and we were willing to be used by him.  Being part of Petey and his owner's reunion felt like God was at work.  Being part of the whole affair over the weekend felt like St. Francis has a sense of humor.
Posted by Adam Trambley at 8:14 PM