I'm chair of the Sharon Neighborhood Redevelopment Committee as part of our Community and Economic Development Commission.  Trying to make a difference in a neighborhood is neither quick nor easy.  Two articles caught my eye recently of places where something positive is happening, however.

The first is in Erie, Pennsylvania, where a group of Benedictine Sisters are reclaiming what was one of the city's worst blocks.  The work started when Sister Mary Lou Kownacki went back to the house where she grew up to take care of her dying father.  While she was there, she began to teach neighborhood children poetry and get to know her neighbors.  After her father's death, she stayed, and brought other sisters and community members with her.  Working with the neighborhood's old Polish church and other local leaders, dilapidated housing has been renovated or demolished, a community garden planted, a Catholic Worker house started, and the "Sisters House" created where neighborhood children can come for programming or to cook a holiday dinner for the entire neighborhood.  Instead of Central European families trying to bring their families to America for a better life, now neighbors are hoping to be reunited with those still in Puerto Rico.  And, as Sister Mary Miller notes, "Beauty is important to any lasting neighborhood revitalization."  (Read more about the amazing work on Trinity block in Erie beginning on page 4 of the June issue of The Mount Magazine.) 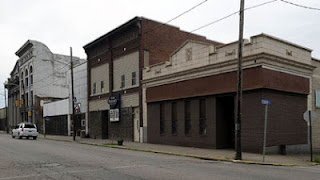 The second article comes from the Pittsburgh Post-Gazette, and describes how chef Kevin Sousa is opening a restaurant in Braddock, which the paper describes as, "a desolate corner in one of the region's most desolate business districts."  He plans to make a go of it by pulling together a variety of resources, from Community Development Block Grant Funding, to fresh produce from a neighborhood garden, to dishes made in a pottery studio in the local library basement.  In addition to the restaurant and walk up window, he is coordinating with others to offer micro-brews made in the building and with Springboard Kitchen whose staff will use the restaurant's facilities to prepare meals-on-wheels.  Perhaps most amazing, however, is his commitment to the neighborhood is such that he plans to move there.

Revitalizing a neighborhood is tough work.  But a poet, a restaurant owner, a grandmother, or just someone who cares can make a difference. Sister Mary Lou and Kevin Sousa both love their place, love its people and offer their lives to find their community's strengths and share its struggles.  With such efforts, even the toughest places can burst forth with beautiful flowers, good food, safe streets, and thriving children.